Every year the Children’s Radio Foundation hosts the Youth Radio Awards, which celebrates the enthusiam, dedication and passion of the youth reporters who broadcast weekly and community radio stations around South Africa.

These awards are the only youth media awards in South Africa, which recognise the community stories around various social issues the that young reporters have captured and shared with their listeners.

This video highlights all the action from the 2015 Ubuntu Lab and Youth Radio Awards. The Ubuntu Lab is a mini-conference which brought youth from across South Africa together to share and discuss the philosophy of ubuntu – including acts of giving, sharing and compassion. The same youth reporters were celebrated in the Youth Radio Awards, with winners in categories like Best Youth Reporters, Best Ubuntu Show and Best Community Activity.

Produced by Cosmos Productions with the Children’s Radio Foundation 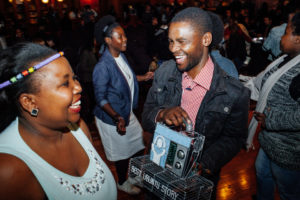