Paraphernalia is a quirky theatrical experience that questions the notion of ‘bigger is better’ consumerism. This visual theatre production is directed by Jacqueline van Meygaarden and created in collaboration with a stellar cast of physical and visual performers; Daniel Robinson, Andrea van Meygaarden and Nadia Woodward. This show was created in 2007 and has been developed and perfected over the last 5 years. It performed at Out the Box Festival in Cape Town in 2008, the National Arts Festival in Grahamstown in 2010, and had a successful run in Cape Town for schools and the public in 2011.

The show incorporates a number of visual theatre styles – mask theatre, object manipulation and stop-frame animation. These elements are combined on stage to tell a story of how we interact with everyday objects in the modern world. Paraphernalia looks at the cycle of buying that we are accustomed to, which is eroding our humanity. We start to lose connections in our relationships with people, and giving up the things that are important to us in favour of consumerism and the latest fads.

At the core, it’s a story of what we think we need in life to be content, and takes viewers on a personal journey of questioning their own addictions and motives.

This show was originally inspired by The Story of Stuff, a well known animated film by Annie Leonard.  See the full Story of Stuff film: storyofstuff.org or watch our version of the film that includes excerpts from Paraphernalia that was created for the Project 90 x 2030 school toolkits on carbon emission reduction. 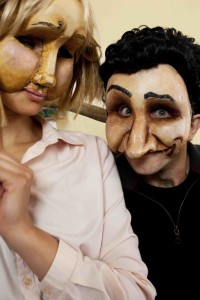 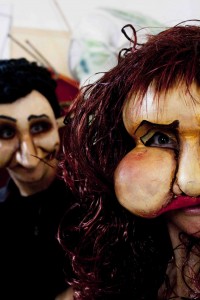 “An insightful and emotive look at consumerism in the modern world… Half absurdist, half comedia dell’arte, this multimedia piece is endearing and innovative. Its use of daily objects as moving, living characters along with gorgeously choreographed stage movements is captivating and thus this show becomes a shining example of true fringe theatre.” The CUE Newspaper, 2010