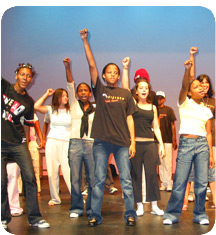 A short documentary film made for City at Peace – Cape Town. Jacqueline filmed and produced this film over 2 years at the workshops, meetings, rehearsals and performances of the this dynamic youth-led organisation.

City at Peace uses the performing arts to teach a diverse group of young people about cross-cultural understanding, non-violent conflict resolution and leadership for social change. Youth participants of the programme are drawn from the townships and suburbs of Cape Town, and the film shows how the youth of South Africa can be an example of a truly integrated group working together to cause positive social change. City at Peace is founded on the belief that true social change will never occur in South Africa until individuals have the capacity to create meaningful, honest and understanding relationships across divisions of race, language, economic and social backgrounds.