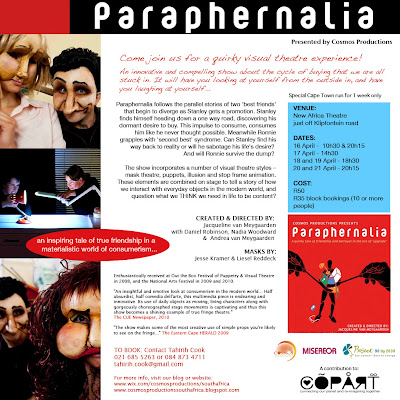 PARAPHERNALIA, our quirky visual theatre show is finally in Cape Town!
Come and share the magic from 16 to 21 April 2011 at the New Africa Theatre, in Sybrand Park.
This show was developed in 2008 and has grown from its original ideas into an ‘endearing’ and ‘innovative’ production that has inspired audiences at the National Arts Festival two years in a row.
Directed by Jacqueline van Meygaarden and co-created with Daniel Robinson and Andrea van Meygaarden. The latest incarnation of the show showcases the mask design of Jesse Kramer and Liesel Reddeck, and has Nadia Caldera (now Woodward) in the new role.
Tickets are R50 and R35 for block bookings.
To book, contact Tahirih Cook on 084 873 4711 or tahirih.cook@gmail.com