Joyce’s Choices on tour in the Western Cape! 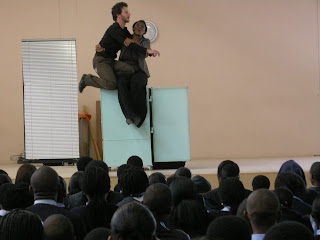 “Once again, a big thanks for coming out and performing your visual theatre show. We hope to meet you in the future when we work on some environmental programme.”
Brian, Educator at Settler’s High School
“Thank you so much for a splendid and highly professional performance…You have made an impact on our learners!”
Kathima, Educator at Rhodes High
“Thank you for your wonderful, up lifting performance! We have all enjoyed the show immensely, and have been inpsired by its message.”
From the 2010 Herschel Grade 10’s and staff
“Thank you for the thought provoking performance you shared with our students on Friday. This work you are doing is so important and the reinforcement of our serious environmental issues in such a creative way made a heartfelt impression on our students. I was fascinated by the use of the puppet and the BOX.”
Janet, Educator at the American International School
These comments reflect the way our production, Joyce’s Choices, was received at all 10 schools that we performed at in and around Cape Town in September this year. Our ability to perform for so many schools over the two week period was by no means a small feat because the national teachers strike (which started when we left for the Eastern Cape leg of the tour the week before) continued until the tour ended! Several schools that were situated in the townships around Cape Town were unable to have us come and perform because of the strike even though they were really interested. Educators and learners were often absent, understaffed schools struggling to cater for matric exams and in some cases schools had to close down completely. However, our determination to make sure our performances happened paid off! 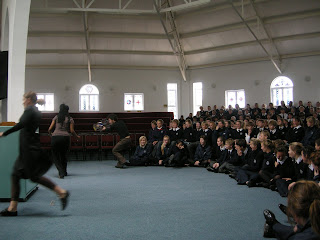 Our first two performances in the Western Cape took place out in Somerset West at Mondeor Eco School and Somerset College. The latter was our biggest audience during the 3 week tour, Joyce was introduced to over 400 learners in a beautiful chapel where the cast was performing! Next we performed for over 300 learners at Herschel. This was the only performance that took place in a proper theatre environment during the tour. The cast loved being back on stage with sound and lights to support their creative work. There is something about the combination of lights and sound that contribute to the magic of theatre! We all want to thank Jesse Kramer with her technical support with the performance on that day. Our final performance during the second week of the tour, was for small group of performing art learners at the American International School. The educator who invited us to perform that day was overjoyed with the whole experience and eagerly asked us for ways to incorporate puppetry into her own educational programme at the school. 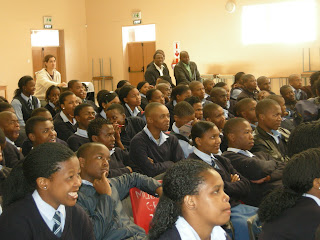 During the final week, Joyce, Greg and Nandi performed at another six schools! They started out at Simon’s Town High School with another large audience of over 300 learners. Their next stop was a very early Tuesday morning performance at Sea Point High School. Later on in the same day, they performed for a second time at Rhodes High School for over a 100 learners. By Wednesday, the teacher strike was settling which made it possible for us to finally perform for learners at Masiphumele High School. This performance was originally scheduled for the previous week but had to be cancelled due to strike action. This performance was dramatically enhanced by Fundi’s TV personality popularity! With over 200 learners in the auditorium that day, it was hard to leave when we were finished because of all the people still lining up to get her autograph. Thursday involved a scenic drive out to Betty’s Bay, where Joyce’s Choices was performed for a group of Grade 10 learners from Bridge House that were on a week long environmental camp. By friday we were all feeling a bit tired when we arrived for the final performance at Settlers High School out in Bellville, only to be revived by the sheer delight and enthusiasm of the audience! There were literally tears of laughter from learners throughout the performance that day! 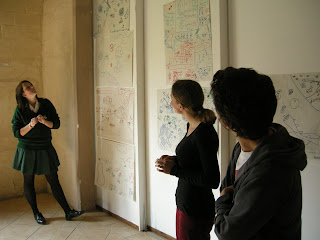 The cast not only performed at 10 different schools during this two week period, they also conducted 8 workshops. Each workshop was a completely different experience, reflecting the interests and beliefs of the participants. Generally speaking, the workshops would start out by asking the audience what they thought about the play. Learners were invited to reflect on what had taken place, to respond to the story and the characters. Many were worried about how old Joyce was by the end of the play…they could see she had been alive for a long time! After this they were invited to close their eyes and imagine a world they wanted to live in one day…to really feel it and experience it. We wanted them to focus on the positive through this expercise rather than get stuck in what was negative about the world around them. 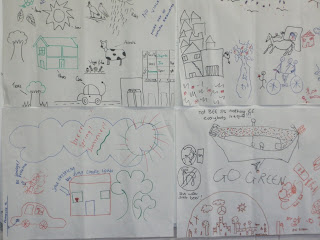 In most cases, this approached proved to be very effective. Workshop participants created amazing worlds with innovative technology, new forms of human settlements, lush vegetation and happy people. The process of creating a world they wanted to live in one day appeared to release energy and enthusiasm about the future! However there were times when their negative beliefs seemed to block their ability to think about what they wanted and what was possible. In these situations, the workshop facilitators searched for creative ways to engage participants so that they could move beyond their beliefs about what could be achieved in the world.
Positive or negative responses aside – a number of fascinating conversations grew out of these workshops. Learners grappled with conflicting desires at Masiphumele, a desire to be successful and wealthy one day and a desire to care for the natural environment. It was challenging for learners to see how they could satisfy their personal desire for a particular form of success which was closely connected to the consumption of stuff and their realisation that it was the consumption of stuff which was contributing to climate change! Many workshop participants made a connection between the way Joyce was living her life of conspicuous consumption and the environmental deterioration in the play. They talked about the relationship between the way people were living and the impact it was having on their environment. Many knew about renewal energy and alternative forms of technology. We talked about how there many different ways one could respond to climate change…how one could be responsive just by becoming more responsible consumers. Without fail this process of performance combined with workshopped engagement made for a stimulating, generative experience for the learners, educators and the cast of Joyce’s Choices! 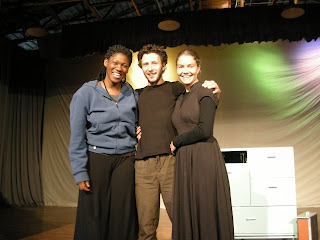 It was with a combination of sadness and joy that Joyce’s Choices school tour came to end after 3 weeks on the road. The cast had had an incredible experience, working together in this way can be intense and consuming. We all enjoyed being part of a team and it was sad to part ways (even though all of us were looking forward to having some time to rest!). The tour ended with a sense of joy because of the satisfaction we felt regarding the impact of the play on stimulating debate and engaging young people in a wide variety of learning environments. We all felt that we had achieved what we had set out to do! So over a 3 week school tour, the play was performed 15 times for over 2000 learners and we had facilitated 11 workshops! Hopefully, Joyce’s Choices will be able to visit schools again in the near future to continue this important process of engaging young people about the future they want to create and what they are going to do to make sure it happens!
Tahirih