Cosmos will again be working with Elemental Kids on their winter school holiday programme, from 24 to 28 June 2013. This year during the abundant rains of winter children will have an opportunity to create a stop motion animation film about, with and next to water. They will create the story, develop the characters, the set, film it and add sound. In the process children will be able to explore different roles in the film making process – story writing, directing, acting, set making and sound engineering. 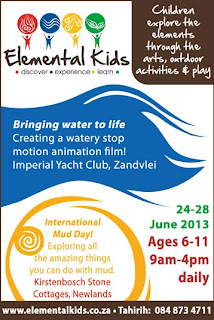 Cosmos will record sound effects that the children make theselves for their characters, and edit the film to a finished product, which they can watch at the end of the holiday programme. The screening is an exciting affair with popcorn all round!

The holiday programme will be based at the Imperial Yacht Club on the banks of the vlei, and children will go out on the water with a variety of different boats during the week, have access to an endlessly entertaining Art Space and enjoy the beautiful outdoors with access to a cosy fire place in the club for the rainy winter days.

To see the stop motion film from their FIRE holiday programme last year, watch it here: FIRE film. This was created by children aged 6 to 12 years.